To celebrate the launch of Islington in Bloom 2019, I joined the Islington Parks team for a fun day of mini-den building, messy play and planting in Paradise Park.  It was a beautiful day and everyone (including some adventurous “little people”) had fun! 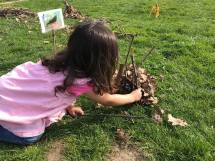 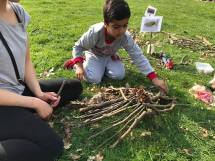 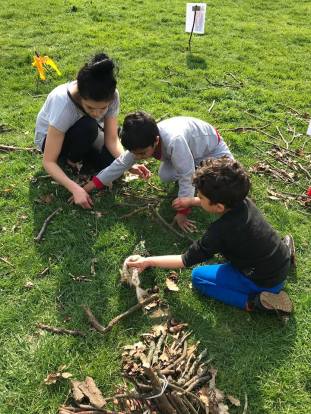 Join us this Sat 30th March 11am-3pm, at Paradise Park for Islington Council’s launch of Islington in Bloom 2019. There’ll be planting and another nature-based activities, including mini-shelter making with help from some very special mini guests!

Hello!  It’s been a while, right?  One of the problems with (and also, obviously, the thing I love most about) this job is that when I’m busy, I’m outdoors constantly and I have little time for sitting in front of computers updating websites…hey ho!

It’s difficult to predict, these days, exactly when Spring has definitely sprung, but we remain optimistic!

To that end, I’m now taking bookings for the summer term.  Please also see the Community page, where I would welcome your feedback and any interest in several groups I’m working towards setting up in the near future.  Many thanks!

In other news….Christopher Hatton Primary March 30, 2015

I have been running a Forest School programme with a Reception class from Christopher Hatton Primary School since last October.  They’ve had 12 sessions so far, split between a class of 30 who come in two groups of 15 to Barnsbury Wood, a local nature reserve run by Islington Conservation Team.  We’ve had a huge amount of fun and learning, including building fairy homes when the “Big Bottomed Dragon” carelessly squished the fairy village – we were rewarded

with gems and decided to even build a new home for the dragon to stop it from happening again!

We’ve played with mud, looked for worms, listened to birds and made nests and whittled and decorated journey sticks to take home and played lots and lots of 123 where are you?! I have to thank Polly Shields, their teacher, for being so determined to make this programme happen (failure was NOT an option!) and for just “getting it” so completely, allowing the children to have so much time and space to explore, learn and play. It has meant that we’ve been able to reach the point where I can see the learning taking place; seeing children finding different areas of interest in nature – whether it be sticks, mud, mini-beasts, tree-climbing, making up games

, learning the names of birds and their calls….and I know Polly does loads to back this up once they get back to class too, it’s fantastic.

Last week, I had my last session this term with one of the groups and introduced them to whittling with peelers.  Some took to it like ducks to water, some found it harder and took a little longer.  Either way, I was amazed after about 20 minutes of going from one child to another, assisting, redirecting, swapping tools etc to suddenly turn around in the circle and see everyone sitting there, heads down, intently whittling away as if their lives depended on it!  (They are 5!)  In fact, even (maybe especially!) those who I would normally say struggle to stay engaged with a task, or are often afraid to risk engagement in new things or lack perseverence, remained totally focussed on this until we ran out of time.  For me it was a “This is what it’s all about!” moment – when all the theoretical stuff just pops out in front of you; living, breathing proof that it all works

2014-15 catch-up: a year of happy collaboration with Octopus Community Network

Doesn’t time fly when you’re having fun?!  Looking back, I see it’s been over a year since my last post – and what a great year it’s been!  Well, I guess one of the many advantages of being busy is that I get to spend more time outside doing what I love, rather than sitting indoors on the computer blogging about it – and I’m OK with that! Slowly learning to juggle both though!  🙂

After making connections with Octopus Community Network in late Dec 2013, we’ve worked together several times, including January 2014 at the Biddestone Road Open Space consultation event, where I ran a fire-lighting and   cookin

g workshop (see previous post); the Wild Places lauch event in Archway Park in early April,   with mini-beast hunting, den-building, nettle string and elder bead jewellery workshops; and   Environmental Summer School, for which the Octopus crew ran a few sessions of their own and called me in to do bushcraft.  Over two sessions, I focussed on the survival skills of den-building  – more on this later – and, in the second session, knife work

and fire, making mini-fires, followed by a big fire in a fire pit and then whittling sticks on which we cooked bread on the larger fire.

More recently we have participated in a Fun Day for residents on Bemerton Estate, where we focussed on the prolific bird activity of the season with a bird trail, pinecone bird making and nest-building.

Last Saturday as the opening event for Graham Street Park, N1, which has been recently refurbished and, as usual, Octopus called on my bushcraft skills for the event.  We had a mini-firelighting workshop, followed by toasting marshmallows on a larger fire, then mini-den building again.

thinking about technique, resources and planning and comes with the brief that the dens must be built to scale using only twigs (branches) that the mini-figure (we) would really be able to manipulate – no sense using materials of a scale that we would be unable to manipulate in real life.  This challenges participants to think of alternatives to the brute strength that would be involved in ramming a tree-trunk sized branch into the ground, such as using a forked branch and leaning several branches together, forming a tent structure.  We had some great results from this innovative lot, as you can see!

A great day of bushcraft at Biddestone Road park accompanied the consultation event for Islington Parks central team’s consultation event. The second part of what proves to be an exciting process to redevelop the rather un-loved and much under-used Biddestone Road Park on the edge of the Loraine Estate incorporated work with the Octopus Communities Network and Sticks&Stones to deliver this Bushcraft event. As it was still pretty cold then, we all decided that a fire-lighting workshop was the order of the day.

children wait patiently in line to sharpen sticks (with due care and attention to health and safety of course!) for marshmallow toasting 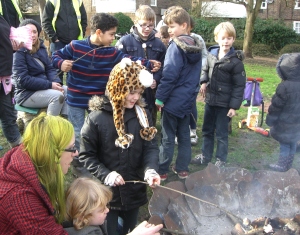 “To the victors, the spoils!” Toasting marshmallows on the fire

UPDATE: There will now be a drop-in ‘make’ session on Thurs 31st from 3-5pm where we will be making props for the evening Spooooky Doooo (Thurs 31st 6-9pm) as well as building a den. No need to book, just turn up – we’ll be in the area just below the cafe garen/next to the cafe. £5/3 to join in. Hope to Spoook you there! 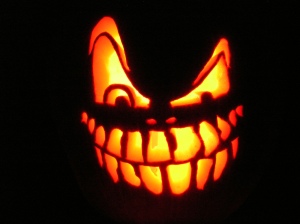 Back in July I helped out with Queen’s Wood Fun Day. But somehow I never got round to putting up the photos! (although they are on my facebook page: https://www.facebook.com/SticksandStonesForestSchool)

Queen’s Wood is a beautiful and amazingly peaceful woodland opposite Highagte Woods. It’s run by a volunteer committee and other volunteers, in conjunction with Haringey Conservation Team. They have always supported my work with children and I am happy to help them out at this great fun, annual, family event. You can find out more about Queen’s Wood, becoming a Friend of Queen’s Wood and other events and activities they run here: http://www.fqw.org.uk

Children and families were invited to create a “fairy village”. Also on offer was mud-creature making and bug hunting. There was some really super construction going on, as you’ll see, and what was really lovely was seeing families working together on their constructions, having fun and using their imaginations. A fantastic and fun day!

So, without further ado, here – at last! – are the photos!

Children and families were invited to build a fairy village. Also they made mud creatures and hunted for bugs. 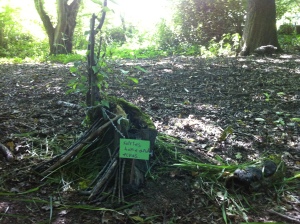 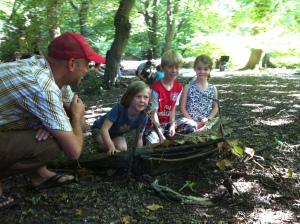 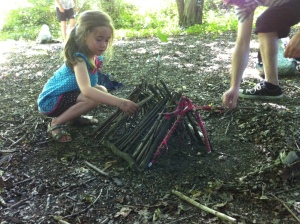 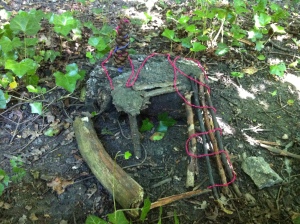 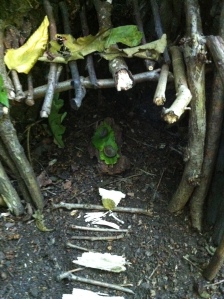 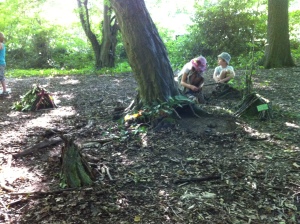 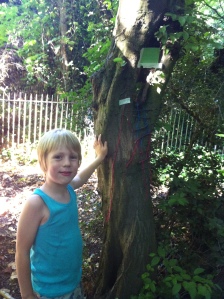